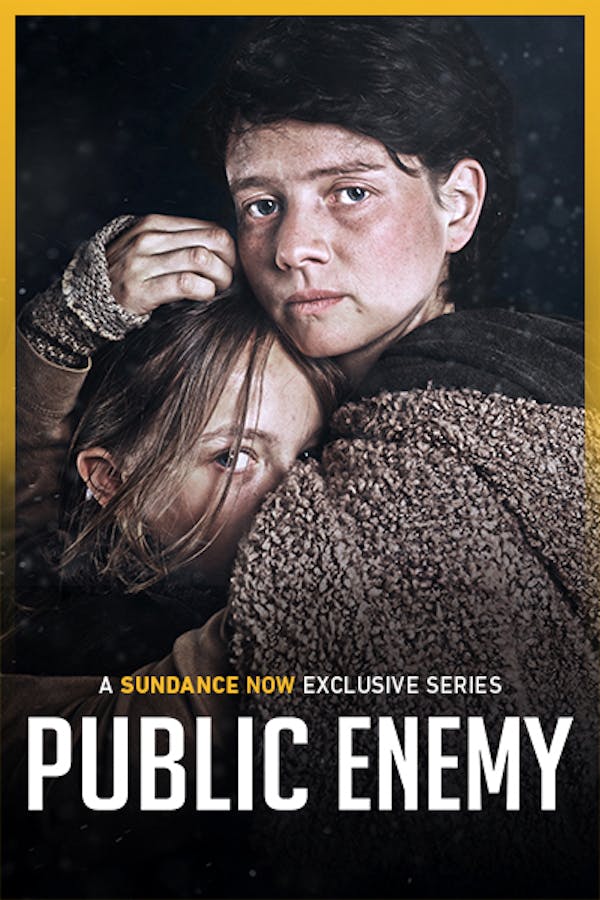 Guy Béranger is a dangerous child murderer is at the end of his prison sentence. His release on parole to the custody of the monks at Vielsart Abbey leads to an outcry from the nearby small village and to the rest of the country. When a young girl disappears on the outskirts of the abbey, the entire village is in uproar. Chloé Muller, a young inspector based in Brussels, is assigned to the investigation to protect the despised Béranger, bringing her face-to-face with the fears and secrets of the seemingly peaceful local community.

A child’s drawing catches Chloé’s attention: it depicts Noémie with a deer-headed figure. The investigation leads Chloé to a network of poachers.

The case takes a new turn when the autopsy reveals a symbol carved into the little girl's scalp: it's Béranger's symbol, the killer's signature!

Lucas’s brother tries to make him see reason. Chloé and Michaël scour Béranger's past, hoping to find someone likely to reproduce his crimes.

Vincent and his gang notice Béranger in the vehicle. Armed and inebriated, they're willing to do anything to take justice into their own hands.

Chloe, Lucas & Patrick are in a race against time: they must find Béranger before Vincent and his gang take justice into their own hands.

Béranger offers to make a pact with Chloé, which would force her to lie to the people closest to her, in exchange for information on the Toy Dealer.

7. The Well of Souls

Chloé and Michaël are called to investigate a strange incident at the abbey and a new child, Bastien, disappears on his way to school.

Chloé and Michaël investigate the deer head. And the young monk gives up the identity of the mask's last-known owner: his brother Vincent!

9. Thou Shall Not Kill

An investigation is opened on the circumstances surrounding Vincent's death. Michaël comes across a final clue while packing up the case files.

Chloé retraces the final elements of the investigation. The story takes a new turn when we learn that the Toy Dealer is still active.

The second season of the critically-acclaimed Belgian crime drama resumes two years after the electrifying conclusion of the first. Another young girl is missing. Chloé must come out of retirement to try and piece together the clues of her disappearance.

When the parents of Jasmine, a young girl who disappeared two years ago, come to her as a last resort to find their daughter, Chloé returns to active duty. She thought she’d left everything behind, but when she pieces the clues together, she discovers this disappearance is linked to her sister Jessica. In order to find her, there is only one person who can help her: Guy Béranger. The child killer agrees to help her with her investigation in exchange of a right to leave the abbey for a few hours a day. Vielsart is once again put to a test. We discover Jessica’s life with the Toy Maker and her relationship to Jasmine.

Chloé’s instinct was right. Jasmine was abducted by the Toy Maker. She is faced with her first dilemma when she finds a clue about Jessica. She teams up with Michaël once again. His wife, Caroline, came back to live with him and the kids and she’s not thrilled to see him involved in another investigation. At the abbey, the monks deal with the consequences of Béranger’s outing in the village. Patrick, now the village outcast, realises he might lose custody of his son.

3. The Mystery of Faith

The corpse discovered at the abandoned farm is identified as the priest of Jasmine’s parish. Chloé and Michaël learn more about the Toy Maker’s MO: he scouts his future victims the day of their First Communion. They manage to find a name: Simon Herman. They get ready for a police intervention. Lucas is back at the abbey: Father Mertens, still sick, convinces him to take up Béranger’s noviciate. Jasmine’s punishment is still not over.

Simon Herman was a trap. Caroline resents Chloé more and more as she keeps putting Michaël in dangerous situations. Patrick and Lana reconcile and join forces to reopen the inn. Lucas convinces Béranger to offer his help to Mona, the village hairdresser who treated him as a normal customer in episode 1. Chloé follows a military lead by herself.

Chloé is kept hostage a paranoiac retired military. She finds out all the girls kidnapped by the Toy Maker have all been held in this place to be “trained”. Michaël unwillingly teams up with Lucas in search of Chloé. Jessica has a secret rendez-vous with Martin, a local boy who delivers supplies to the Toy Maker’s farm.

Chloé is resting at the abbey’s infirmary. Michaël finds DVDs in the bunker and Chloé discovers the Toy Maker’s brainwashing methods, hoping to see some sign of life from Jessica. Lucas, unsettled by Chloé, decides to go on a trip to scatter his brother Vincent’s ashes in the woods. Patrick confronts him on his feelings for the police inspector. Béranger spends time with Mona, helping her with her law thesis.

7. A Sheep Among Wolves

Chloé and Lucas wake up together. Michaël agrees to keep Chloé’s secret about Jessica. A young woman is found dead from a ketamine overdose. Chloé and Michaël track the drug to the dealer but he refuses to talk. Jessica steps into Martin’s world. People in Vielsart gossip on Mona’s relationship with Béranger. She is threatened by her brother.

8. Honor Thy Father and Thy Mother

Father Mertens is dead. The abbey mourns its loss, especially Lucas. Chloé faces the consequences of her encounter with Devos, the drug dealer. She may have to resign. Béranger questions her motives: whom will she choose saving between Jasmine and Jessica? Mona stops seeing Béranger, but he does one last favour for her. Emile is helpless – Patrick has to do what he fears the most. Michaël heads a major police operation in spite of his inner fears.

9. The Massacre of The Innocents

The police investigation has to move forward despite the grief. Chloé and Michaël change their leads and learn about the Toy Maker’s childhood. At the farm, the Toy Maker deals with his conflicting feelings for Jessica, while she learns Chloé is still looking for her. She plans an escape with Jasmine and Martin. Mona dares to see Béranger one last time to thank him personally.

The Toy Maker’s community is packing up the farm. They have to escape as the police is growing closer. Chloé and Michaël find the Toy Maker’s father. Jessica tries to help Jasmine one last time. Mona picks up the pieces of her life with the help of Patrick and testifies at the abbey. Patrick confidently meets the social worker in charge of Emile.