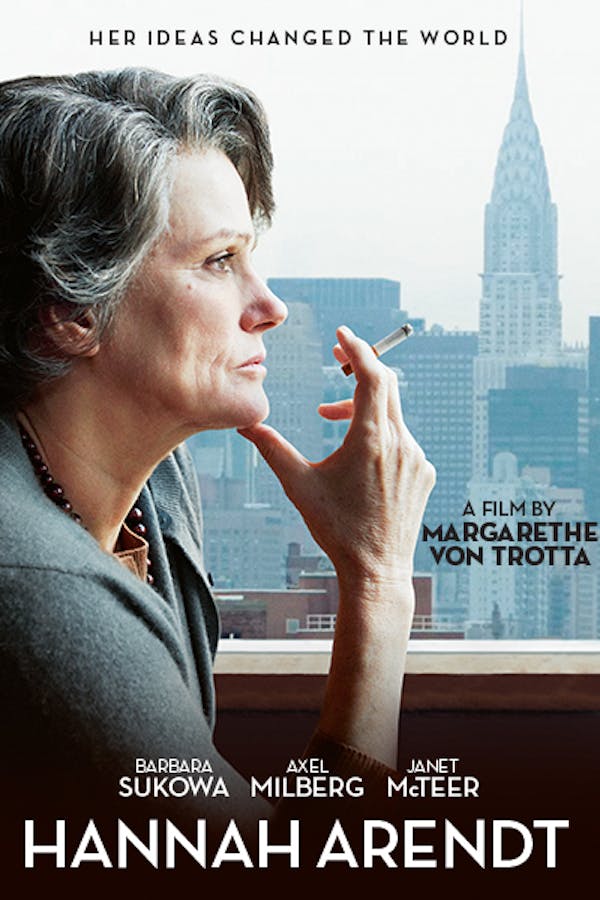 The sublime Barbara Sukowa reteams with director Margarethe von Trotta for a brilliant new biopic of the influential German - Jewish philosopher and political theorist. Arendt’s reporting on the 1961 trial of ex-Nazi Adolf Eichmann in The New Yorker—controversial both for her portrayal of Eichmannand the Jewish councils—introduced her now-famous concept of the “Banality of Evil.” Using footage from the actual Eichmann trial and weaving a narrative that spans three countries, von Trotta beautifully turns the often invisible passion for thought into immersive, dramatic cinema.

A biopic of influential German-Jewish philosopher and political theorist, Hannah Arendt. Her reporting on the trial of Adolf Eichmann in The New Yorker introduced her now-famous concept of the “Banality of Evil." Starring Barbara Sukowa as Arendt.

Well made with some strong, tho some less-so, performances. After a slightly hagiographic start, Trotta leaves a lot of it nicely nuanced, ambiguous, and personal. The relevance examining the underpinnings what we now call cancel culture was fascinating and instructive.

I totally agree with Caelo_we are dealing with evil or should i say EVIL today in the US_i love Hannah (Barbara Sukowa) is wonderful and young Hannah is beautiful_so the Pope allowed Eichmann to escape and go free_i've also read that he supported the Nazi killing of Jews_just amazing _when will we wake up_i love Hannah's insight into all of this..................

A very smart film. Not entirely in German. Half English and half German. I think in the time of a Trump presidency and administration, it's an important film to watch. I highly recommend it.